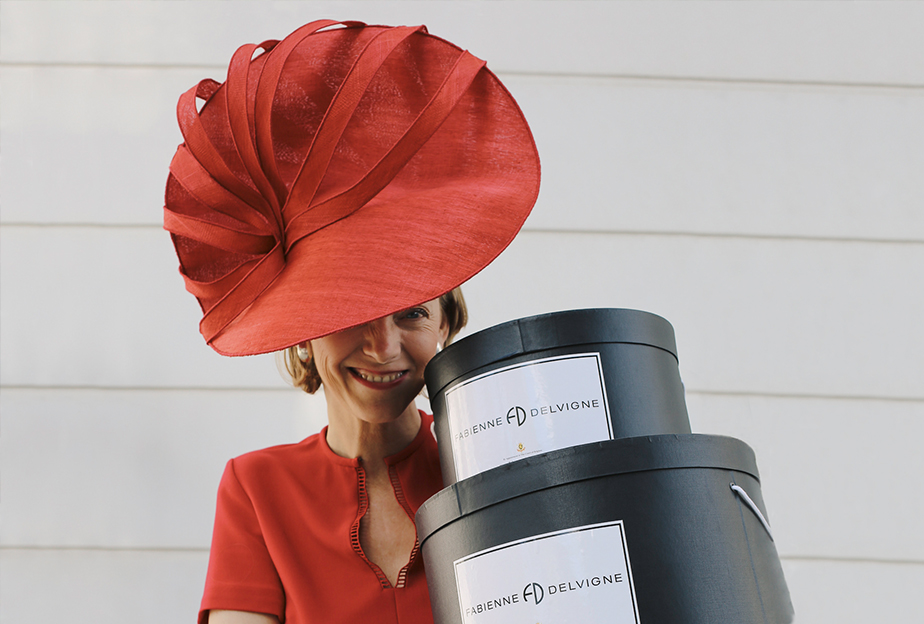 Established 30 years ago, the haute couture Maison Fabienne Delvigne and go to milliner of European royal families, has recently begun her international journey beyond the continent.

Approached by the most exclusive store in Tokyo, Isetan Mitsukoshi, and by Chinese haute couture designers, her hats are now sought after in Asia and her collection is followed by over 25 million viewers!

As for the UK, she decided that this year she would come to her clients based in London as opposed to them having to travel to Brussels. Preceding Fabienne’s arrival, Marina Windsor wore Fab, one of Fabienne’s iconic hats, at the wedding of Lady Gabriella Windsor on 18 May 2019. It was an immediate success and even before setting foot in the UK, Fabienne had begun to conquer yet another royal family…

A three-day marathon began. Accompanied by friends and one the brand’s Ambassador, Eliane Astor, a Belgian aristocrat who recently married Charles Astor and now lives in the UK permanently, Fabienne went from meetings to events to more meetings, in and out of black cabs, with her black boxes Maison Fabienne Delvigne with the discreet mention “royal warrant holder to the Court of Belgium”. Fabienne has been a royal warrant holder since 2001 having made her first hat for the Queen of Belgium in 1995. She arrived in London as Chelsea was in bloom – the Chelsea Flower Show and the Chelsea pensioners out pausing with Fabienne wearing her wonderful hats – a perfect mise en scene ahead of Ascot!